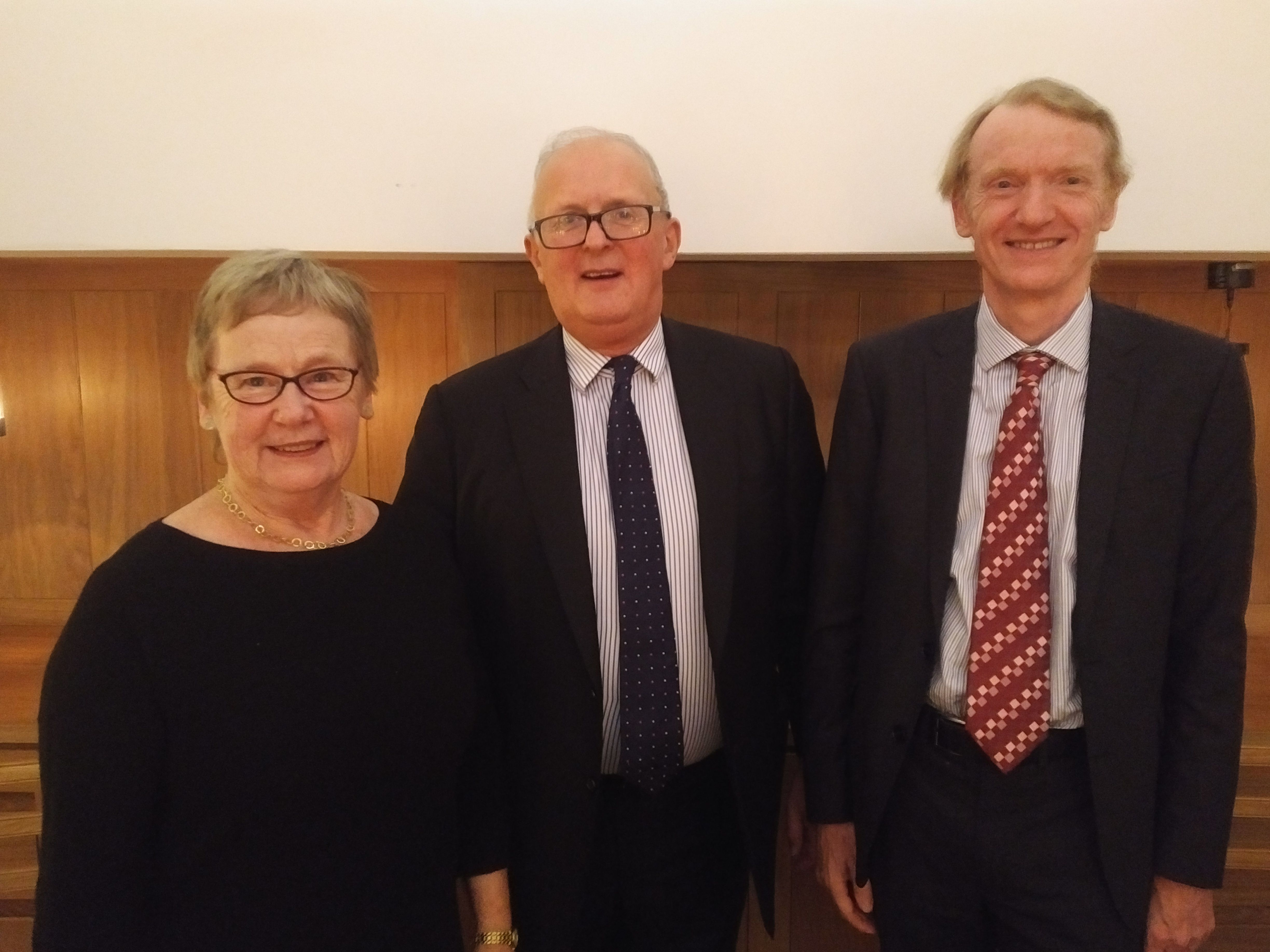 In the second Great Brasenose Lawyers event, we discussed the life and legal work of Professor Barry Nicholas, one of my predecessors who was associated with the College for 52 years. We heard, at the Gulbenkian Lecture Theatre in the St Cross Building, from Professor Francis Reynolds, Emeritus Fellow of Worcester College; Professor Wolfgang Ernst, Regius Professor of Civil Law; Professor Birke Häcker, Linklaters Professor of Comparative Law; and Mr Jeffrey Hackney, Emeritus Fellow of Wadham College and Lecturer for Brasenose.

The outlines of Barry’s life story are fascinating. His mother could not afford to send him to Oxford so it was crucial that he obtained a scholarship. He gained one from Brasenose and came here in Michaelmas Term 1937 to read Classics. He had to do war service and afterwards completed his degree in Law. In Hilary Term 1947 he became a Law Fellow and Tutor of the College. His co-Fellow Ron Maudsley did not come immediately to Oxford so Barry taught six hours each weekday and four on Saturday mornings plus university lectures, which is a stint which would be unheard of today. He became Professor of Comparative Law in 1971, which was a position which was and still is attached to Brasenose; he succeeded Otto Kahn-Freund, who will be the subject of the third in the series. This chair is now occupied by Professor Birke Häcker.

In Hilary Term 1974 about 150 students occupied what was then the Indian Institute (now the Oxford Martin School) which is near Brasenose at the end of Catte Street. I recall this from when I was a student (although I did not participate). Barry was the President of the University Court, which some saw as a hospital pass, but which role he carried out with great skill and dignity even though he had never practised as a lawyer.

Barry became Brasenose Principal in 1978 and continued to occupy that role for eleven years. He had in fact been offered the Presidency of Corpus Christi College but turned it down because he knew the Brasenose Principalship was about to fall vacant. It was said by Professor Peter Birks in his appreciation, written for the British Academy, that Barry was “already the guiding hand from the time of his return from Tulane in Michaelmas 1960”; Sir Noel Hall had been elected Principal in 1960 but could not immediately extricate himself from his role at the Administrative Staff College at Henley. The Vice-Principal then died so that Barry was Acting Principal for a year and then Vice-Principal for two years from 1960. After Sir Noel Hall, HLA Hart was Principal for five years and Barry and Herbert were an effective diarchy. When finally elected as Principal in his own right, he built an excellent relationship with the Bursar Dr Robert Gasser, whom we were also delighted to see in the audience for the event.

Professor Peter Birks, in his appreciation of Barry written for the British Academy, says that during his Principalship “the macho image of Brasenose culture receded and there was a strengthening insistence on intellectual endeavour, less tolerance for those who were not trying to do good work”. His connection with the College did not cease when he finished as Principal. He was still teaching Roman law for the College into his 80th year.

At our Gulbenkian event, Professor Francis Reynolds, who was taught by Barry, commented that it was impossible to think of post-war Oxford law without Barry. Francis concentrated in his address on Barry’s work on the Vienna Convention which was ultimately not ratified. Professor Reynolds said that the best introduction for a common lawyer to the Convention remained Barry’s seminal Law Quarterly Review article on the topic. Professor Reynolds described Barry as the “ideal Oxford don, a careful teacher and researcher, who also took his fair share of administration.” Many members of the audience were surprised to learn that, before Barry, there were no reading lists at Oxford. He did not claim that Barry introduced these single-handedly, but did maintain that his reading lists, described as “works of art”, were highly influential and gave the subject of Roman law at Oxford a structure that it had previously lacked.

Professor Ernst told participants that Barry’s An Introduction to Roman Law (first published in 1962) has been translated into many languages including, intriguingly, Mandarin. It is still sought after and has been described as the best written introduction ever in law. Professor Ernst pointed out that writing a textbook on a historical topic was a difficult feat: we actually know very little about history, the sources are limited. There can be no certainty on anything one writes, just, in Professor Ernst’s words, “shades of probability”. Putting these in a textbook, however, will make the book unreadable, and this is why Barry eschewed this. The greatness of the book, according to Professor Ernst, was that it prioritises its didactic purpose, untroubled by controversies, and without even referring to the original sources. The book offered “cognitive closure”, a temporarily perfect world. This came with a risk, a price, however, namely that, sooner or later, the student might find out that there is little that is certain about Roman law – the risk being that the student might go “cold turkey”.

Professor Birke Häcker, the current occupant of Barry’s Chair of Comparative Law and another panel member to have had the great good fortune of having experienced his tutorials, paid tribute to Barry as a comparative lawyer. Professor Häcker’s focus was on Barry’s introductory textbook on The French Law of Contract, which looks at French contract law through common law eyes and therefore gives more prominence to cases than a French book would have done, but unapologetically so. The book has stood the test of time well and has only very recently, and reluctantly, started to be replaced on the Oxford Comparative Law reading list (following a root and branch reform of French contract law). She remarked, in concluding, that from reading his book, and indeed all his publications, even someone who did not know him could get an appreciation of “just how enthusiastic and wonderful a teacher he was”.

Jeff Hackney thought that the book An Introduction to Roman Law may have saved Roman law teaching in Oxford. In a lively and at times outright hilarious talk, he described Barry the Roman lawyer, and the role that Barry had in the development – and survival – of the Roman law tradition at Oxford. Jeffrey Hackney painted a bleak picture of Roman law before Barry: the rule that exam questions were to be asked in Latin (whether one had studied it before coming to Oxford or not), aptly described by Mr Hackney as “intellectual Philistinism”, with textbooks that “treated Roman law as if it had come directly from the mouth of God” – one of which, Buckland’s Manual of Roman Law, he thought was to Roman law what Megarry and Wade: The Law of Real Property was to the law of property – but without the jokes.

At the dinner there were more personal reflections including a moving contribution from Barry’s widow Ros Nicholas and his son Peter. It is remarkable to consider that he was the first Oxford Head of House to be Catholic since the Reformation.

Lord Saville, who was present at the event, said at Barry’s Memorial Service, “That character engendered affection and respect in equal and very great measure from all who were privileged to meet him … To us all Barry Nicholas never seemed to change, or indeed to grow old. He remained exactly as he was when he taught us, all those decades ago, as he will hereafter in our memories. He was truly a great man. There is no doubt that the trumpets will have sounded for him on the other side”.

Barry Nicholas as a Comparative Lawyer by Professor Birke Häcker

An Introduction to Roman Law: Putting the Preface into Perspective by Jeffrey Hackney