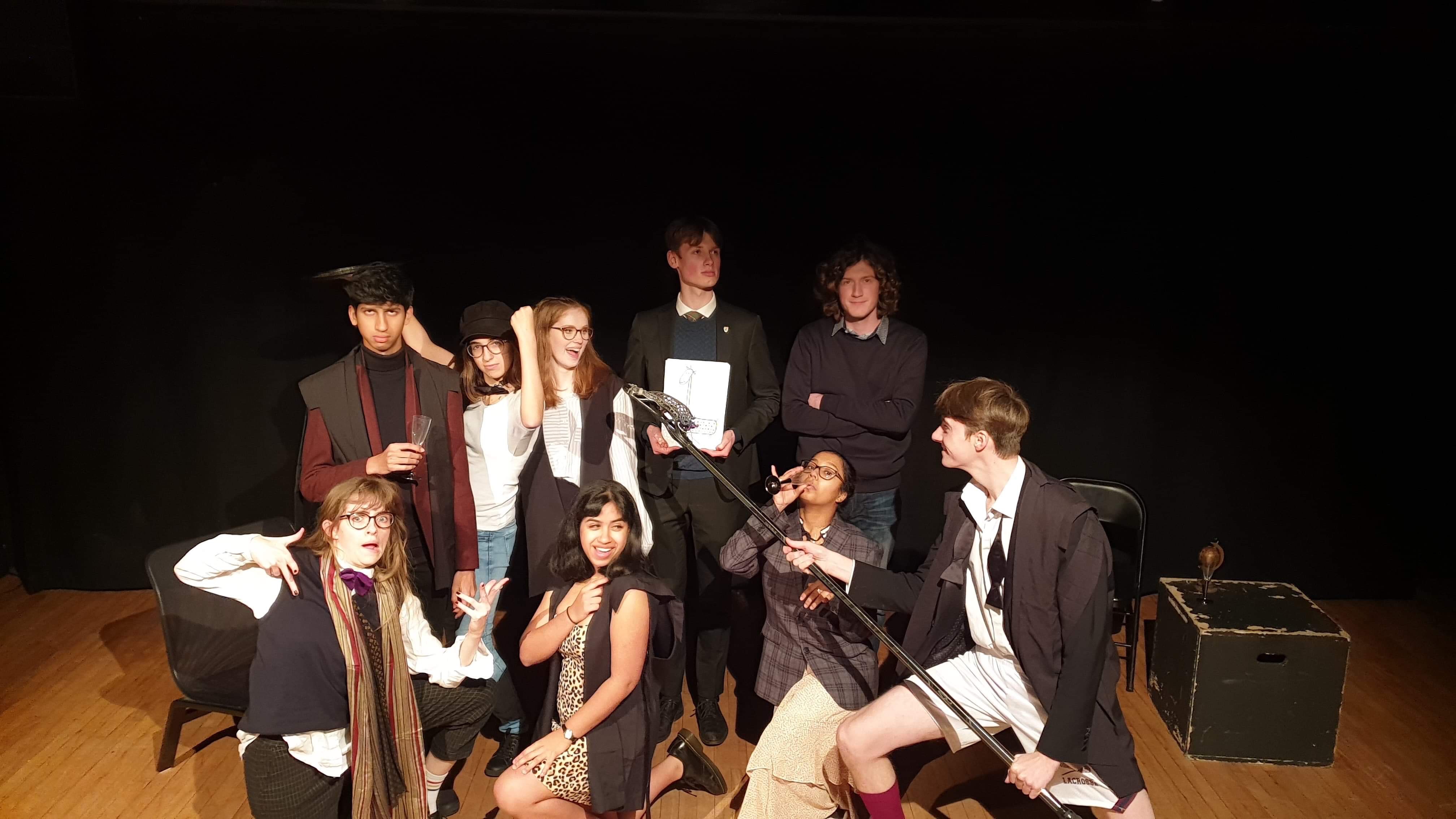 If you happened to find my laptop abandoned in the Brasenose library at three in the morning on a Tuesday, I’m sure the first thing to greet you would be the google doc of unrelated bullet points left to hopefully and miraculously congeal into an essay whilst I go for a panicked walk around Radcliffe Square. And whilst I’m sure this 574 word summary of the entirety of Middle English would be HIGHLY entertaining for any stunningly bored reader, if you instead went for an explore through my google drive (please don’t), you’d perhaps stumble across a seemingly endless stream of half-started plays and three page movie scripts, getting progressively worse in quality all the way back to the distant age of 2016. And until Brasenose made the mistake of letting me in, this is what they always were - unfinished and really quite terrible. But come mid-November and my friends and I were stood on stage dressed like absolute muppets attempting to remember lines to a sketch we’d finished approximately 36 hours before, because, by some incredible and ridiculous piece of luck, writing no longer meant being sat in the back of a biology lesson trying to listen to as little of the process of non-cyclic photophosphorylation as possible whilst trying to think of appropriate character names for a 6-foot tall neo-punk member of the Royal Horticultural Society - writing meant being in the Brasenose student common room on those stunningly comfy sofas ten minutes before Hall dinner, watching your friends act out the scenes you wrote during the warm-up, taking critical feedback from the pool players and frantically reworking jokes to fit the seven different ideas suggested to you by the Mario-Kart competitors.

Because within four weeks of being at Brasenose, I’d gone from someone who wrote terrible scripts in their room when they couldn’t sleep, to someone who still wrote terrible scripts, but now did so surrounded by irritatingly talented friends, whilst increasingly aware of an unending Facebook feed of potential opportunities to write a play or send an emo teenage-angst poem into a sophisticated magazine. And this - as well as a few too many Newcastle Brown Ales - is why my friends and I ended up in a drama competition utterly unprepared, having an absolutely brilliant time.

You can’t escape writing in Oxford. Have a google/bing/yahoo/firefox of Oxonian writers and you will have a list of playwrights, poets and authors long enough to fill another lockdown. There’s even a nice bust of Tolkien gazing down at you in the English Faculty Library. And when you’re here, you get to do the things these cool peeps did. I’m not in any way saying my future is going to be like that of any of their illustrious careers. I’ll probably end up as a key stage three English Teacher. But Oxford is a place where you can be creative until you actually run out of biros (or at least the ones with the comfy grip); its alarmingly easy to find so much to do that you begin to forget about your degree (see me doing quite a lot of my seminar reading on the way up the stairs to the class). I’d barely been there a day until we were being told about drama cuppers and the opportunity to write and put on a short play completely for free. And soon we were DTB (‘down-the-bar’ in case you were confused/concerned) coming up with drastically unsuitable plotlines and elaborate staging techniques, motivated by the concerning competitiveness of soon-to-be Arts Rep Elena, battling essay deadlines, tonsillitis, inadequacy, poor time keeping and a lack of competency, until, by some form of divine intervention and Finley (lighting engineering and first year medic), we got to the performance and we could somehow say we’d put on a play. For me, drama cuppers summed up everything incredible about Brasenose and Oxford. The excitement, the enthusiasm, the beautiful chaos. But I also owe it quite a lot. I made some of my closest friends through it - in five weeks we’d gone from complete strangers to a bunch of weirdos singing Yazoo and thinking we were funny - and the whole experience made me realise that writing is so much more fun with your mates and 30-minute stage slot, and it threw me into the madness of drama. Before my first term I hadn’t been back-stage in a theatre; by the second term I was assistant-directing play.

I’m an English student. I kinda have to like drama. It goes with the outfits. But it had never been something I’d done. We didn’t have school plays. My school didn’t have enough money to do one. And before I came, I always thought that would matter - that what I hadn’t been able to do at school would mean that my offer to help write or direct something would be politely declined. It was Oxford. Surely everyone had already been Hamlet? But with cuppers it didn’t matter, that was the point. It was all about opportunity, about doing something new. And after that there is enough on offer to fill every day of every term. I entered the new writing festival and got a role as assistant director, putting on a short play in about a week, and this was followed by working with Brasenose’s own drama rep Katie to think up an (ill-fated) arts week play. Before this whole pandemic called it off, we were holding auditions and thinking up sets and imagining flamboyant costumes and it was all brilliant. There was also the iconic Brasenose panto, written by the second-year English students and performed by anyone willing to look like a muppet (JCR President Bodyguard went straight on to my CV) which was performed in the dining hall on the last day of the first term and was wonderfully stupid. You don’t even need to be taking part to be exposed to drama - there’s a continuous run of different plays, college activities and opportunities to read creative pieces in student magazines and newspapers, and there is also more to come, with hopes for more Brasenose-specific creative writing and theatre and art.

This whole pandemic thing obviously put college life temporarily on hold, but even then, lockdown didn’t stop Oxford bringing drama into our undramatic lives. Our wonderful tutor Sos Eltis recommended various plays accessible through the universities subscription to Drama Online, and there was plenty of discussion of both One Man Two Guvnors (positive) and Jane Eyre (less positive) following the NT at home thingy, as well as a continued supply of fascinating seminars from our worryingly dedicated tutors. And maybe there’s even enough time to get a head start on next year's panto. Or perhaps, and somewhat shockingly, do the summer reading.

With more opportunities than recent uses of the word unprecedented, you can really strive to be as dramatic as humanly possible. But it doesn’t have to be all-consuming. And I think that’s fab. I’ve been able to dip half a toe into drama, but I’ve not had to sacrifice my whole leg. You can do your work (or most of it) and write a bit and help out at a play and criticise a few poetry competitions and then maybe leave it for a while and run a few cross country races, try and sing in a choir, become a Hassan’s regular, train as an outreach ambassador, take up the ukulele and then redecide that you’re actually a born thespian. Obviously you can try and spend more time in the theatre than the seats and have the time of your life, but what is both so brilliant and so infuriating about Brasenose and Oxford is the range of things you can get involved in. There are wonderful access schemes, music groups and sports teams all at college level, and then every society in the university to have a crack at as well. It will have been said a thousand times before, but there is just so much to do. And I love that you can be bad at it all, still do it, maybe get slightly better, and then throw yourself into something else. You can’t be bored at Brasenose.

And what is so lovely is the universal attitude of everybody involved in everything. There is a careful balance of gorgeous chaos and tenacious enthusiasm underscoring all, and it means that it really doesn’t matter if you confuse stage left with left as in right and left or a certain way of leaving or something, and it really doesn’t matter when you’re singing the wrong hymn a tone and a half out. And that is the best part about Oxford, and especially Brasenose. Everyone just wants you to be having the best time you could be having. It isn’t about what you have done before. Different life experiences become clear from day one, and that can be scary, but what I hope others have been able to discover is that they will not hold you back. There is clearly more to be done with access and outreach - I am from a sponsored academy in the East Midlands, the second least represented region of England, and there are moments when I notice that - but being here gives me hope that Oxford University, and Brasenose College, can stand as the place where anybody, whatever they have been able to do previously, can get involved with everything. Drama has been one fantastic part of my first year, but so have the thirty-seven hundred other things I’d never done before, or even thought I would ever have had the chance to do. And I still get to be a weirdo from Leicestershire because that’s fine. You fit in at Oxford not by your experiences as a 17-year-old but because you just want to do stuff and love it - an attitude Brasenose stimulates and encourages. Statistically I shouldn’t be at Oxford. But I am and it's awesome. I love my degree, I love my College, I sometimes find my friends acceptable. It's so much fun. And the best bit is I’ve only done a year.

By Joel Dunworth (1st Year English, and the tall one in the photo)