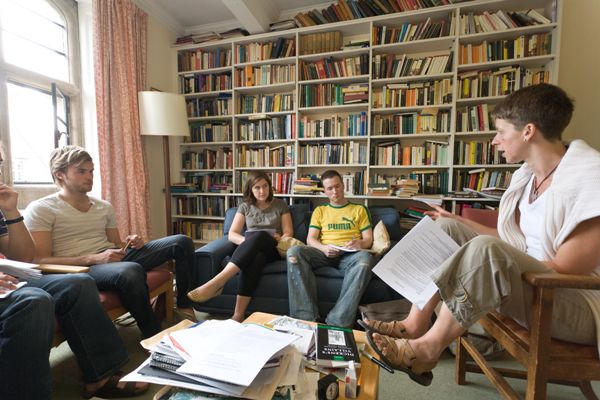 We admit around nine students each year in total to study English, English and Modern Languages, and English and Classics.

Brasenose has a vital and exciting English community. The two Tutorial Fellows (Sos Eltis and Simon Palfrey) are known for their expertise in drama old and new, but they and the College lecturers have teaching strengths right across the spectrum of literature in English. We sponsor a yearly Arts festival run by students, including plays and poetry readings, and enjoy active links with the Oxford University Dramatic Society and Playhouse and Globe theatres.

The teaching of our undergraduates is split equally between one-hour tutorials (one or two students, in discussion initiated by student essays) and two-hour classes (where the whole year group of seven or so get together to explore a particular writer, genre, theory, poem, passage or historical movement). In both tutorials and classes, the accent is upon testing and exchanging ideas. The study of English at Brasenose is an interactive, intensely engaged process. It is not about being told what to think. It is, very simply, about reading widely and diversely, and exploring and developing ideas. Here at Brasenose we believe in the excitement and pleasure of intellectual and literary discovery. We consequently encourage our students to take full advantage of the unique range of choice offered by the Oxford English syllabus, and to follow their own particular interest or passions.

Finals (Course I) has seven papers comprising Shakespeare, the four period papers covering 1350-1830, a special option, chosen from over 20 topics, including The American Novel after 1945, Post-War British Drama, Postcolonial Literature, Writing Feminisms/Feminist Writing,  Film Criticism, and Comparative Literature. The culmination of the course is a Dissertation on a topic entirely of the student’s choice.

There is also a special course (Course II) in English Language and Early Literature, which is mainly philological. About 5% of the candidates take this course each year.

Read more about English at Oxford.

Brasenose English graduates have progressed into careers in every sector of employment, including arts, education, charity and social work, marketing and communication, media, journalism and publishing, leisure, tourism and, of course, academia. Our recent alumni include lawyers, novelists, television producers, entrepreneurs, teachers, fundraisers, accountants, actors, directors, speechwriters, civil servants, publishers, social workers, poets, journalists, and a ‘twisted pop cabaret’ performer. The list is potentially endless. Within a few years of graduating, alumni have been gainfully employed doing everything from editing scripts for Midsomer Murders, to reporting on conflicts in the Middle East, designing computer games, or making a documentary on chlamydia in koalas!

The reason Brasenose English graduates are flourishing in a such a broad range of careers and professions is that the degree is not just stimulating and enjoyable but also develops core highly marketable skills. Years of studying literary language, writing analytical essays and receiving detailed feedback gives our alumni an extraordinary command of language and an ability to present arguments, ideas and materials with clarity, force and precision. In this era of ‘fake news’, evasion and distortion, an eye for detail, nuance, accuracy and implication has never been more valuable.  Individual research projects and the discipline of developing and defending independent ideas every week produces self-disciplined graduates with high levels of initiative, resourcefulness and imagination.  Trained in analyzing large bodies of evidence, engaging with new theories, and absorbing and critiquing alternative interpretations, English graduates are adept at synthesizing different approaches. The Oxford tutorial is all about challenging assumptions, exploring possibilities, and thinking again, so it fosters independent and flexible thinking.

Studying literature written from the seventh century onwards might seem a peculiar preparation for engaging with the modern job market and the issues and challenges that face our society. Yet the Oxford English degree involves understanding the relation between individual thought and expression and the social, political, philosophical, religious and scientific ideas and values of the time. It is about studying literature as event, as a response to contemporary society, as intervention and provocation, as a vision of the other possible worlds and selves we could inhabit. Studying English is about thinking creatively and imaginatively. It is about who we are, who we have been, and who we could be. That is why having studied literature for three or four years at Brasenose, and having learnt how to learn, English graduates have flourished in an extraordinary range of careers.

The English and Modern Language Course

Brasenose warmly welcomes applications for this course, which allows students considerable freedom in tailoring their studies to meet their interests. The first year examinations consist of four papers in the Modern Language and two papers chosen from the English Prelims course (see above for details). For finals each candidate sits four papers in Modern Languages and a choice of four papers from the English Literature Course. There is also an opportunity to write a link paper, bringing together the two sides of the course. See the Brasenose Modern Languages page for details on the Languages tutors that teach on this course.

Read more about English and Modern Languages at Oxford.

The Classics and English Course

Brasenose also welcomes candidates for the joint course of Classics and English. If candidates are studying Latin and/or Greek to A-level this is normally a three-year course (Course I). But candidates who have not had that opportunity can take a four-year course beginning with an intensive introduction to Latin and Greek (Course II). Either version offers a superbly integrated (and truly ‘joint') course, which alongside English literature of the Renaissance and beyond and Graeco-Roman authors such as Herodotus, Euripides, Virgil, Catullus, and Juvenal also explores the rich connections between ancient and modern literature. Students can pursue whatever aspect of English or classical literature appeals to them, but we feel that the highlights of the course are the three ‘Link Papers' studied in the third year (or fourth in Course II). In these, through topics such as Epic, Tragedy, Comedy, Pastoral, and Satire, the twists and turns of literary genres can be traced from Homer to Milton and Walcott, or from Theocritus to Arnold and Heaney. See the Brasenose Classics page for details on the Classics tutors that teach on this course.

Read more about Classics and English at Oxford.