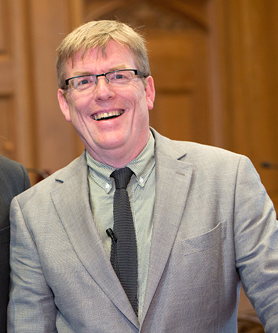 The College is deeply saddened to announce the death of John Gardner, Fellow and Tutor in Law from 1991 to 1996. John originally hailed from Glasgow and was an undergraduate student at New College. He then read for the BCL, where he was awarded the Vinerian Scholarship for the best performance of his year. He was immediately elected to a Prize Fellowship at All Souls College, and then to a tutorial fellowship at Brasenose, teaching alongside John Davies and Louise Gullifer. John then moved to a Readership at King’s College, London before coming back to Oxford as the Professor of Jurisprudence in 2000 at the age of just 35, taking the chair previously held by former Brasenose Principal, Herbert Hart.  Finally, John moved to a Senior Research Fellowship at All Souls in 2016. He was elected a Bencher of the Inner Temple in 2002 and a Fellow of the British Academy in 2013. John was not only an academic superstar. A talented cook and website designer, he also played bass in a band until just before his death, which also comprised two other members of Brasenose, Ewan Smith (Jurisprudence 1998-2002) on vocals and William Swadling, his successor to the Brasenose law fellowship, on keyboards. He died from cancer on 11th July, surrounded by his wife Jenny and young family. Our thoughts are with them.