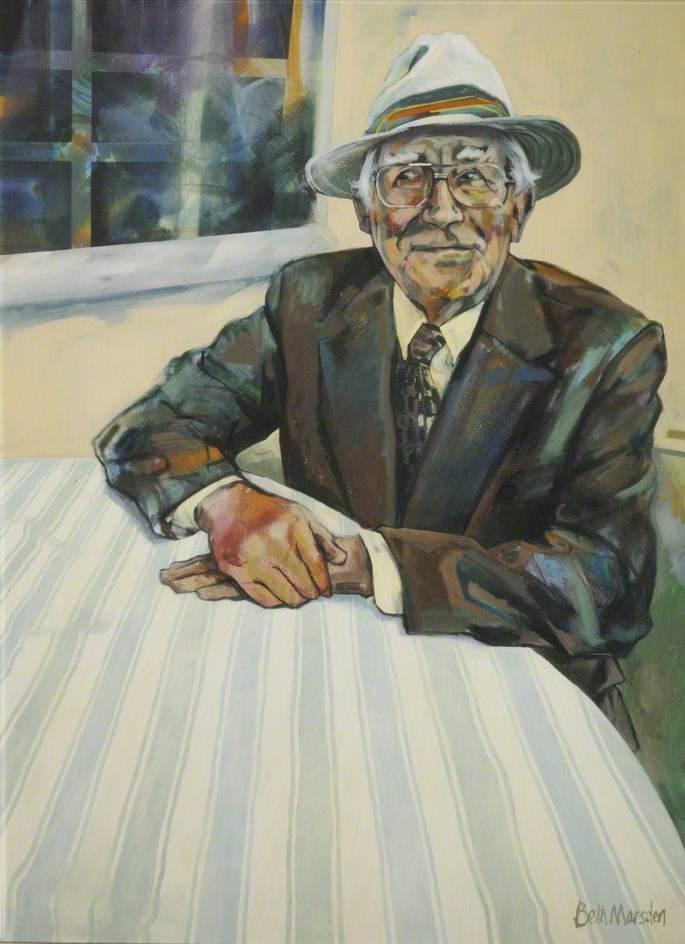 It is with sadness that I record the death of Dr Harry Judge, aged 90, on 2 April. He had a very long connection with Brasenose as a student, a Professorial Fellow and latterly from 1988 as Emeritus Fellow.

Harry was born in Cardiff in 1928 and lived there until he was 18. His grandfather was a farm bailiff and his father a railway clerk on GWR, in which capacity he was posted to Cardiff where he met and married Harry’s mother. Harry attended Cardiff High School in 1939 after taking a scholarship examination (which was also means tested). He won an exhibition to Brasenose in 1946 but entry was deferred due to national service in the RAF.

After reading History, he intended to study theology and enter the Church of England but had second thoughts and went into teaching instead.

His appointment to the Readership followed a distinguished career in schools including twelve years as head of Banbury School (a comprehensive with some 2500 students). His faith in Grammar Schools ebbed over the years (at the time of his marriage he wrote on the certificate that his occupation was “Schoolmaster (Grammar)” ) – and he ended up presiding over Banbury School’s first years as a comprehensive amalgam (which was a controversial reform) and becoming a quasi-guru of the new school system.

He wrote extensively on the politics of education and comparative education drawing particularly on his work in the USA and France. His books include The University and Public Education; the Contribution of Oxford (2007); Faith-based Schools and the State: Catholics in America, France and England (2002); and the charmingly named School is Not Yet Dead (1974).

His work in Oxford concentrated on a research partnership extending across the university, and integrating the university role with local schools in the professional education of teachers. One specific contribution which he made in the more recent life of the college was to encourage the admission of PGCE students as a part of our strategic thinking about admissions and access.

On retirement from full time work in Oxford, he was appointed Professor of Teacher Education Policy at Michigan State University from 1988.

He was involved in public life as a member of the Public Schools Commissions of 1965-8 and 1968-70 and the James Committee of Inquiry into Teacher Education. In the 1980s he chaired the BBC Schools Broadcasting Council. In College he was Tutor for Admissions for seven years.

His eightieth birthday was marked by the publication of a volume of the Oxford Review of Education.

He had an eclectic range of interests including narrowboats, bell-ringing, France, and his family. His interest in narrowboats and in College came together in his promotion of the development of a marina on College land at Cropredy to serve the Oxford Canal, and memorably in the Judge family narrowboat ‘Scholar Gipsy’ taking its place proudly in Brasenose colours in the Queen’s Diamond Jubilee pageant on the Thames in June 2012.

One of our Fellow recalls him thus: “A charming, erudite and sociable man perfectly at home in the Dew Drop Inn in Summertown. I value two memories especially: discussing his narrowboat Scholar Gypsy and the Arnold poem it was named after, which we both loved; and attending with him a protest meeting in St Barnabas Church in Jericho about the proposed development of the boatyard”.

As an Emeritus Fellow, Harry took on the role of memory and conscience of the college, a fund of knowledge, experience and wisdom, available to those who requested it, but sometimes also offered more proactively, though always with tact and sensitivity. He could appear old fashioned at times (the last Fellow to dress in surplice and hood for chapel services), yet in other ways he was very modern in his outlook. Tradition served for him as an element of the collective inheritance which gives College its ‘personality’. He was always trying to make Brasenose a better place: as he would see it, make it “more like itself”.

To be with Harry was a privilege; entertaining, informative and occasionally challenging. He had the ability to encourage one to think about issues more broadly – at times gently teasing you to highlight important gaps in your knowledge or understanding (not least regarding College etiquette!) He also invited extremely interesting and thought-provoking guests to College, and was open and welcoming to the guests of others.  Harry's enthusiasm was infectious and he always made you feel your views were important, even if they were rather simplistic and needed to be reconsidered.

In older age Harry remained extremely well informed, enjoyed his reading devouring a wide variety of books, and was eager for all the latest gossip on the goings on in the College that he had a profound interest in, and concern for, for more than 70 years.

His contribution to, and influence on, College make his passing a loss both of a personal friend to many and to the community as a whole.

Harry’s wife Mary shared in that friendship, attending events and College Prayers in chapel from time to time. We share with her and the family in their bereavement.

The Principal wishes to thank several Fellows who contributed to this Appreciation.