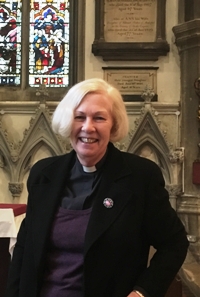 Brasenose College is pleased to announce that Rev’d Professor Judith Brown has been appointed as interim Chaplain, starting 1st January 2017. Judith was born in India but educated in England. She studied History at Girton College, Cambridge and studied for her Ph.D. there on India in the 20th century. After being a tutor and Director of Studies in History at Girton she moved to Manchester University.

She came to Oxford in 1990 to the Beit Chair of Commonwealth History and a Professorial Fellowship at Balliol College.  She retired from her chair in 2011 but says she seems busier than ever.  As well as travelling regularly to India she has twice served as chaplain and guest lecturer on "Minerva", a small cruise ship, as it has sailed along the western coast of India. She worked in a West Oxford parish, particularly looking after the church near the rail station dedicated to St. Frideswide, the patron saint of Oxford. She now ministers at St Mary Magdalen church and is a pastoral associate to the chaplain of Balliol College. (Balliol and "Mary Mags" will loan her to Brasenose until a permanent chaplain is appointed.)  She has a son studied History at St John's College, Cambridge, and a daughter-in-law who studied Music at Queen's College, Oxford. Her late husband was a teacher of English and drama.

She greatly enjoys travel and also gardening, which she finds relaxing and "therapeutic".  She is very much looking forward to her time in Brasenose, to getting to know members of the College, and hopes that people will see her as available to the whole community, whatever their role in college, and whatever their beliefs or lack of them. In December she will be working with Dominic, the outgoing Chaplain, to ensure a smooth transition when he leaves.

Brasenose has a vibrant and active Chapel group and a large (and non-auditioning) choir. Attendence to the Chapel for any student is completely optional and voluntary. Brasenose prides itself on being a multi-faith, cosmopolitan community which embraces diversity and tolerance.