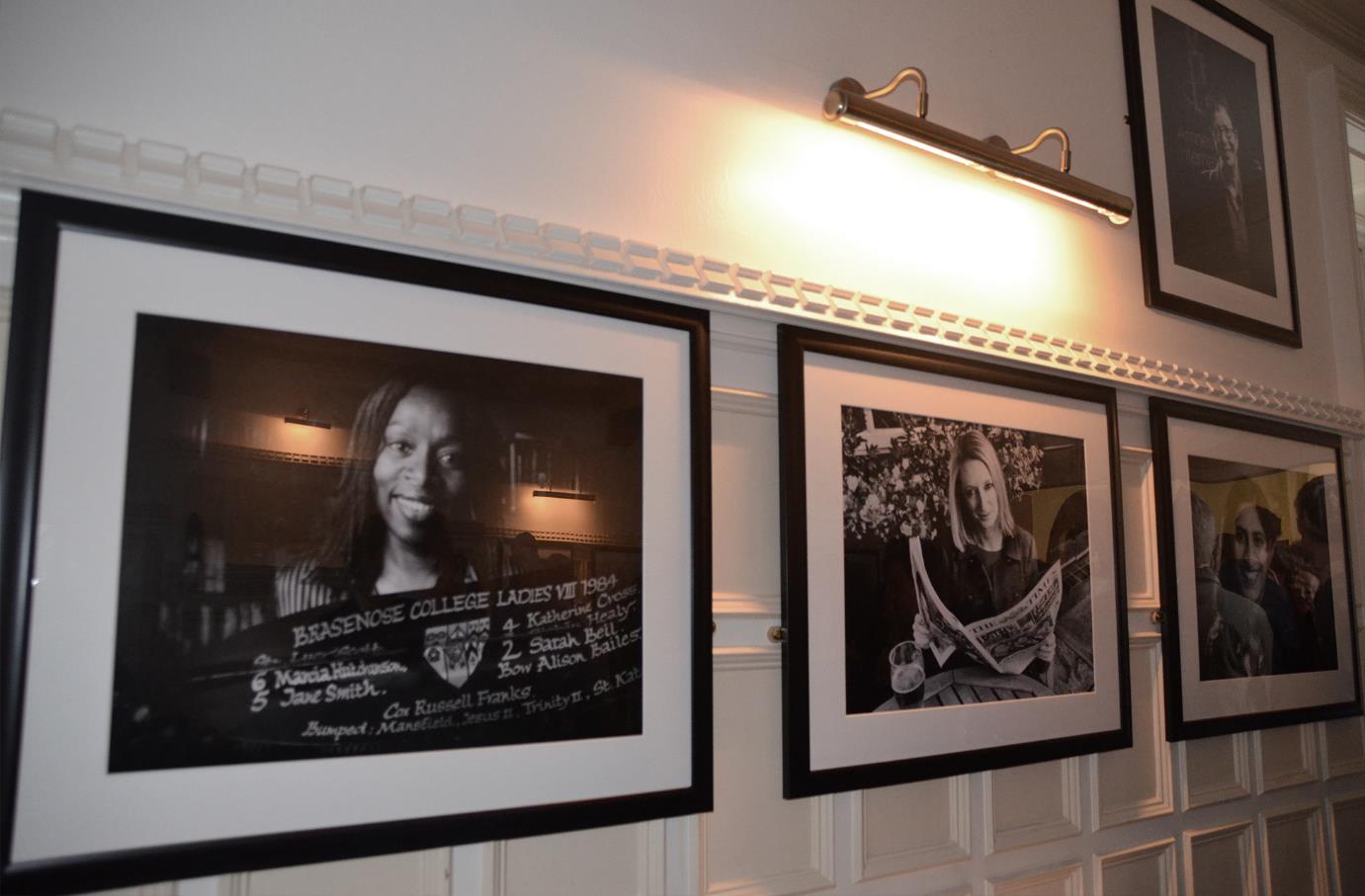 To commemorate the 40th anniversary of the admission of women into Brasenose we really wanted to do something to mark this as students, and thought that it was really important for us to look back over these forty years and reflect on some the achievements and contributions to society that the women who have attended College in this time have made. I came up with the idea for the projects when I saw that Hertford College – one of the other colleges who started admitting women at the same time as us – had done a similar thing. At that point, I didn’t have a very clear vision of exactly how I wanted it to take shape; I hadn’t thought at all about how many portraits we wanted, what size, what women, who would take the photographs. All I had at was a strong feeling that it was important for us to not only celebrate the anniversary itself, but also celebrate the women themselves who have attended Brasenose since 1974. Even though 40 years may seem like a relatively short time compared to centuries of churning out men who have gone on to do great things, the wealth of extraordinary women who have come out of these forty years is already quite astonishing! 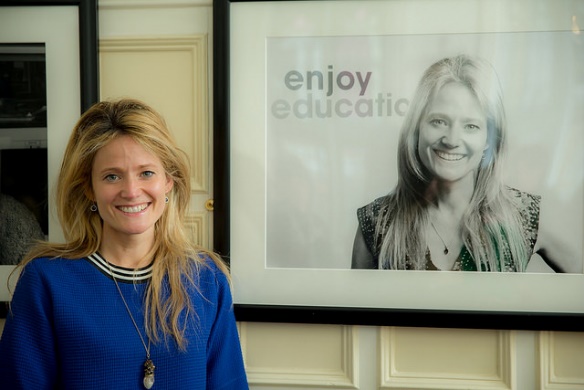 At the first JCR (what we call our student committee) meeting of the year, in October 2014, I proposed that we should celebrate some of the things that the women who have attended Brasenose over the past 40 years have achieved in their lives since graduating. Therefore, modelling our exhibition on the way that the portraits in Hall remind us of the many alumni who have made great contributions to college and to society, we have decided to fill the JCR with a series of portraits of our female alumnae (such as Kate Shand, photo left). We think that having the portraits in the JCR is important because this is our common space and we want the focus to be on showing these amazing female role models to all our undergraduates. It will be really significant for us, especially when welcoming applicants on open days and interview candidates, for them to see the portraits on the walls of the JCR – undoubtedly the heart of the student community – and be shown how much we value all the people who walk through these walls. As one of our interview subjects, top barrister Harini Iyengar, said “"As a British Indian woman of ‎my generation who belongs to Brasenose and the Inner Temple I've never had the experience of seeing someone who looks like me on a wall. I never thought this would happen and am moved that the college and students have done this to celebrate, to affirm and to appreciate the women members of the college.”

So, over the past few months, with generous support from College and the Brasenose Society, Orla White, this year’s Women’s Officer, and I have worked really hard on the commissioning, creation and exhibition of these 12 portraits. First of all we sought nominations from past alumni for Brasenose women they believed to be inspiring and extraordinary; in total we received nearly 200 nominations. Reading the reasons for the nominations was undoubtedly one of the things I’ll treasure most from this process; there were so many stories and anecdotes shared, so many women who have done amazing things with their lives and above all an emphasis on nominees’ personal qualities and how much they are valued by those around them. They were so touching and I was moved to tears on several occasions. One of the things that struck me most was how proud people were of the women they know; that Brasenose students and alumni (women and men - we had several nominate their sisters or wives!) feel such deep affection for each other even as they take different paths in life. To choose our final shortlist, we narrowed it down into various categories of fields of work and then the JCR committee voted to select the final shortlist of 12 subjects. The chosen subjects subsequently had their portraits taken by photographer Bill Knight OBE. Bill was amazing to work with, so helpful, professional, and of course, an amazing photographer. When asked for his thoughts on shooting the subjects, he said “the Brasenose alumnae have very clear ideas about who they are, but are not used to being photographed and most of them approached the experience with trepidation. Over a range of occupations and backgrounds the common denominators were intellect and, in my opinion at least, a sense that they are all spending their lives in the way they want.” After this, each portrait subject was then interviewed by a current undergraduate who is either reading the same degree that they did or wants to go into the same field of work, and we were told by several interviewers how amazing an opportunity it was to be able to meet these women who have achieved so much and yet were still so open and welcoming to students.

On Friday 1st May, we held a launch night unveiling the portraits for the first time, open to all members of college, both students and staff, and we were amazed by how many people came, which just confirmed to us how seriously Brasenose takes the significance of this anniversary and how much it values its female members. On the 2nd May, the Brasenose Society, working with the Alumni and Development office had their own celebration of the 40th Anniversary in College, and almost all of the portrait subjects managed to attend for at least part of the day. It was amazing and inspiring to meet so many of them, and we had many comments about how meaningful the project is. 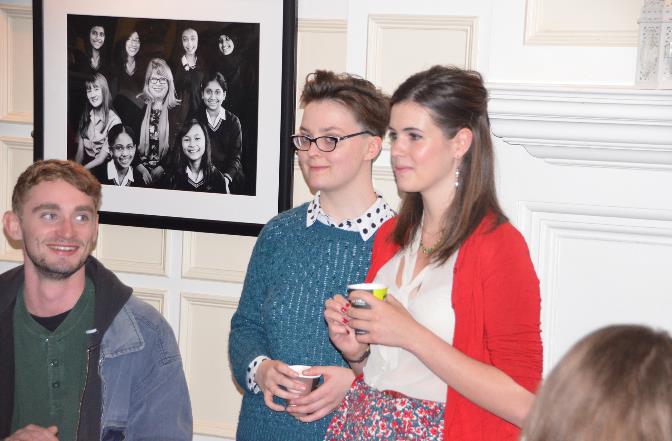 The whole process has been a lot of hard work for both me and Orla (pictured left) but it has shaped my year and I feel so privileged to see what was initially just a thought that popped in my head finally become a reality. Now, the portraits are in the JCR and will remain there indefinitely, meaning hundreds of undergraduates over the years will see how much importance the JCR places on celebrating the achievements of women and how proud we are to have such amazing female role models.

Oxford University students were all male until female only colleges were established in the 19th century. The first colleges to admit both male and female students were Brasenose, Jesus College, Wadham, Hertford and St Catherine's - all first admitting women in 1974. Read more about this fascinating history here. Today, around half of the undergraduate students Brasenose admits are female.