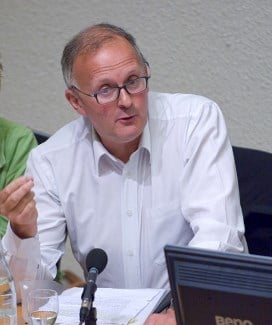 After attending Clee Grammar School which became Matthew Humberstone Comprehensive School when he was in the sixth form, John gained a scholarship to Lincoln College, Oxford. He then did a Bachelor of Civil Law and was a weekend law lecturer at Lincoln and St Hugh's Colleges and Christ Church for four years thereafter.

John was called to the Bar in 1979 and took silk in 1998. He has practised primarily in employment law and human rights. He has also been described in a review as "an employment law rock star”. He is listed as the 4th most reported advocate in the Industrial Relations Law Reports (IRLR). John was Chambers & Partners Employment Silk of the Year 2010.

He acted in most of the major industrial disputes over the past decades including the 1984 Miners Strike, the 1989 Docks Dispute, the News International Wapping dispute, numerous rail disputes and Gate Gourmet.

His landmark cases include an European Court of Human Rights application on the employment of gay servicemen, House of Lords rulings on injury to feelings awards and the dates of outsourcing for TUPE purposes, the Supreme Court decision on whether legal representation is required in internal disciplinary proceedings and the largest ever Employment Tribunal application by 12,000 retained firefighters, which eventually went to the House of Lords.

A frequent lecturer on employment law, John has written 15 books including Bowers on Employment Law (now in its Eighth Edition), The Law of Industrial Action and Trade Union Recognition and Whistleblowing. He [co-wrote] Blackstones’ Employment Law Practice each year from 2006 until the present and is a frequent contributor to legal journals. He is also a former editor of Atkins Court Forms on Employment.

A CEDR trained mediator, John was the coordinator of the Workplace Mediation Project which looks into the use of mediation in sexual harassment cases.

John was a member of the Governing Council at the University of Kent for three years and was formerly a member of the Standards Board for England and the Home Office Task Force on Human Rights.

He sits as a Deputy High Court Judge and a Recorder on the South Eastern Circuit. He is an approved counsel for the Equality and Human Rights Commission.

He is a former chair of Bar Disciplinary Summary Tribunals (until they were abolished) and member of the Bar Council’s Race Relations Committee.

Since 2005 he has been a Bencher of Middle Temple (and a member both of its Estates and Students Affairs Committees).

Basic Procedure in Courts and Tribunals - (with E Misra) Longmans, 1990; republished in 2011 by Wildys

Getting a New Job - Consumer Association, 1981.