Working in the library

Owing to the  popularity of study areas within college desks may not be reserved. Papers/books may only be left overnight if they are placed in one of the library lockers available as weekly loans (0th-9th week).  Please ask a member of staff if you wish to use a locker. 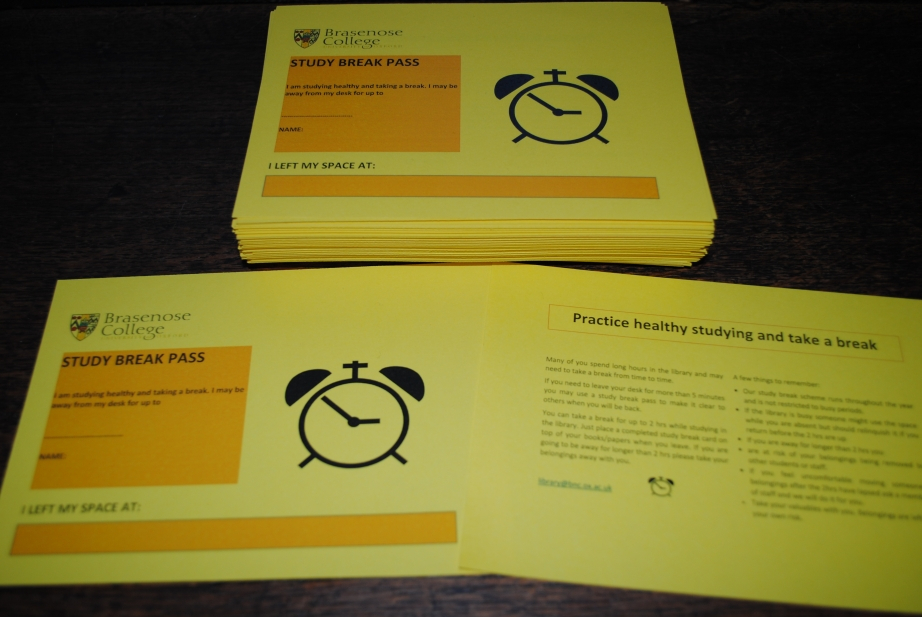 These are for using when you want to take a break for more than 5 minutes and up to 2 hours.

The Brasenose KeepCup is a specially designed reusable cup for hot and cold drinks which allows you to enjoy a drink while you study in the library. They are on sale in Gerties.

All users must read and observe the Library Protocol.

There is a photocopier/scanner/printer in the Stallybrass Library and another through the door at the end of the History Library. Photocopying is currently free of charge and items may also be scanned to email or to a scanned to afolder which appears on your desktop when you login to your profile. Scanning is free of charge.

The College is committed to recycling and the Library is no exception. You are encouraged to place all suitable paper in one of the green recycling bins in the Library. On each bin there is a list of material types that are acceptable for recycling so please check before use. Please do not contaminate the recycling with rogue items. 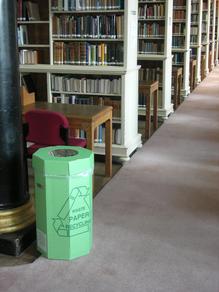 Sorry, there are no reports at this time.

This section will feature reviews written by BNC members of College library books . The first book to be reviewed is a new acquisition:

"A Most Dangerous Book: Tacitus's Germania From the Roman Empire to the Third Reich" by Christopher B. Krebs.

A MOST DANGEROUS BOOK, the latest offering from Harvard's Christopher Krebs (formerly of Oxford's own University College), is a splendid piece of scholarship. This account of the afterlife of a Roman ethnographic treatise on the German people leads the reader with its crisp, lively prose from gloomy Carolingian monasteries to the dark heart of Himmler's SS, via the lustre of Vatican palaces and the pomp of Wagnerian Bayreuth. Essential reading for the student of the Classical tradition and of German culture, but far from the sort book you would be afraid to take home to meet your mother. Krebs runs the gamut from supplying background information to offering sophisticated analysis without ever alienating either the scholarly or casual reader.

At the heart of this study is a short book of about 30 pages written shortly after 96 AD by the influential Roman senator and historian Tacitus. Before turning his stylus to the mucky, murky and murderous history of the Roman emperors, Tacitus composed this account of the customs of the empire's barbarian neighbours. The tribes beyond the Rhine had long represented the people who had most successfully held out against Roman imperium (think of the opening of Gladiator). It is easy to see why a Roman author would find it fitting that if these rough folk could not be made subjects of the Roman empire, they should at least be the subjects of its literature.

Krebs is justifiably cautious about making too many guesses about what the original purpose of the Germania might have been. One point he is keen to push, however, is that we have little reason to suspect (and ample reason to doubt) that Tacitus ever had any actual contact with ancient Germany or its people. In spite of this ignorance, Krebs shows that almost everything you know about German prehistory is most likely derived from the pages of this booklet. Anyone holding to the idea that size matters urgently needs to take into consideration the impact the Germania has had on the world.

This impact is traced over six chapters (after two on the composition and survival of the text) and it is to Krebs's credit that he is able to fit 500 years of history into 160 pages without losing his reader along the way. Even more impressive is his dedication to giving adequate room to the principal agents of this history. For this is a book driven by its subjects, and what a colourful bunch they are: a scholar pope; a wheeler-dealer monk; a charlatan historian; a disgraced French aristocrat; a depressed eugenicist opera buff; and, of course, a short-sighted, dark-haired, pigeon-chested ReichsfÃ¼hrer SS.

While these characters might be what give the narrative its drive, they are not the book's subject. Krebs is determined to keep the actual text of the Germania (from which he liberally quotes) as a Forrest Gump-like protagonist at the centre of the tale. He has good reason to. He demonstrates that a recurring feature of the Germania's reception over the ages is the subordination of the text to the greater purpose which it was chosen to serve. Consider, for example, Annius of Viterbo's history of the origins of the German people, characterized (in Krebs's words) by a "talent...rivalled only by vanity." Annius was a second-rate historian who made a name for himself by inventing sources which would back up the world-shattering theories he would concoct. Seizing upon a throw-away reference in Tacitus's text to the German god 'Tuisto', Annius wrote that this was surely a reference to 'Tuysco', a relative of Noah described by the Babylonian astrologer Berosus, whose testimony he had utterly fabricated. This information was in the Holy Roman Empire (whose leaders were keen to parry Italian accusations of their ancestors' barbarism) and it became a well-known 'fact' that Tacitus was an ancient witness to the noble Christian heritage of the German people. Such acts are described throughout the book. Through the centuries sciences of anthropology and philology are used none too rigorously and are brought to bear on Tacitus's text in order to provide a suitably glorious and respectable prehistory for what would eventually become the German nation.

It is impossible, however, to put out of one's mind the destination of the story of this nationalism. The book's title and its introductory chapter both point the reader to the Germania's eventual adoption by the Third Reich. So while each individual act of misinterpretation may seem amusing and harmless enough, the meta-narrative is rather more disturbing and the reader is forced at each point to consider the obvious question: would the world have been better off without this book? While Krebs does not descend into counter factual history, his second chapter on the book's tenuous survival of the Dark Ages cannot but raise the idea of what the world could have been like had the parchment fallen prey to the rats like so many other documents of the ancient world. This Big Question is rather by Krebs formulated as the rather more subtle: can one have a positive opinion of the Germania in light of the terrible use to which it was put?

A year before Krebs published this book, an embryonic version appeared as an article in the Cambridge Companion to Tacitus. It is possible, I think, to say that Krebs's opinion has undergone some amelioration between the two versions. That article's conclusion dwelt on the 'damage' the text had done to the world. That idea is preserved in the book, however it is moved to the introduction. The rather more ambiguous conclusion here is that *SPOILER ALERT*: "In the end the Roman historian Tacitus did not write a most dangerous book; his readers made it so." Plenty of meat there for a Po-Mo Pat to get her teeth into.

But if the readers of the text are to blame, where, one might ask, does this leave the discipline of Classics? Should we take away from this book the idea that the Literae Humaniores are nothing but a pathetic sop willing to nail their colours to whatever ideology holds sway at a given time? I think we can cautiously say that this is not quite the case. Some redemption is offered by the example of the German Classicist Eduard Norden, who emerges as a rather surprising hero, and perhaps the key to this book. Norden in 1920 (a time when the reputation of the Germania was at its most sacrosanct as a document of authentic German identity) published a book demonstrating that the content of Tacitus's Germania owed far more to the conventions of ancient ethnography than any actual knowledge on Tacitus's part of the German tribes of antiquity. Such a devastating critique threw into doubt the foundations of German identity, just as it was gathering such force in the tumult of the Weimar Republic. The figure of Norden contrasts strongly with the interpretation of a contemporary reader, Heinrich Himmler. That it was Himmler's reading which came out on top clearly surely cannot be attributed to some failing on the part of the discipline in which Norden was working.

What Krebs provides here is a real and compelling argument for the necessity of a strong and independent tradition of Classical scholarship. A timely reminder at a time of university budget-trimming and intrusive market forces. What is lucidly detailed of the Germania could be repeated for many texts from antiquity: those old lies, dulce et decorum etc. It is only by interrogating these cultures, rather than simply accepting what seems to be their surface message, that we can scratch away the alluring imperial patina and reveal that our ancient heritage is far more complicated and granular than it might seem. Such an approach is Classics at its best; and it is a tradition that Christopher Krebs nobly upholds in this book.

The services provided by the porters.

Information on the services and staff.

Information on tuition fees, batels and sources of funding.

Information on IT provision for students.