I am delighted to report on our Admissions figures for 2019 entry. 123 candidates hold offers, including a small number of candidates with deferred offers from the previous year, and in addition to a small number of candidates holding deferred offers for next year. Of these, 91.9% of Brasenose offer-holders initially applied to Brasenose, and 49.6% of offer-holders are men, 50.4% are women. 88.6% of offer-holders are UK students, with the international students representing 10 different countries.

It is especially pleasing that of the UK offer-holders, 76.4% are state-educated, which is well above the University average. This reflects the enormous amount of work by our Schools Liaison Officer, Dr Joe Organ, Fellows, student helpers and the whole College community. More details can be viewed here.

On 6 February we were very privileged to be addressed by Brasenose alumnus and Honorary Fellow, Sir Michael Palin. The South Examination School was packed with over 400 members of the Brasenose Community - Fellows, staff, students and alumni - from the young to the old.  I introduced him as a national and Brasenose treasure. 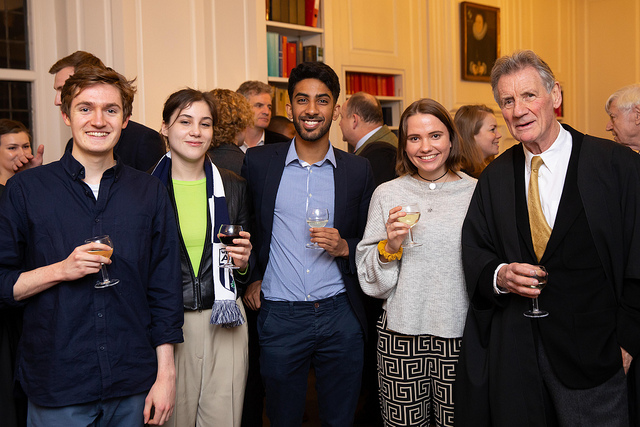 He spoke of his extraordinary career commencing at the Oxford University Psychology Society Christmas party where he co-wrote a show with Robert Hewitson (another Brasenose alumnus). He said that his love of history (which he studied at BNC) and geography suffused his career. His wide-ranging talk covered his early teachers who inspired him, his love of comedy, his recent book Erebus: The Story of a Ship and his documentaries on North Korea. He recalled meeting Terry Jones at St Edmund Hall, his first visit to the Edinburgh Festival, the difficulty the Monty Python team had in funding their films and the particular controversy about the film Monty Python's Life of Brian (which was considered to be blasphemous by some). He joined a small group for dinner afterwards.

Few will forget a fantastic evening. The photo shows Sir Michael with some current Brasenose undergraduates.


We continued our great run of Graduate dinners with a terrific address by Rebecca Abrams the Royal Literary Fund Fellow based at the College.  Describing her career as a zig-zag rather than a straight line, she spoke about her working life as a journalist and writer of many books, including the award-winning novel Touching Distance, and The Jewish Journey: 4000 Years in 22 Objects. Good writing in any medium, she explained, is not just in the writer’s head - it’s a journey that writer and reader must go on together.  She also referred to the importance of maintaining personal integrity, telling us about a time when she’d walked away from a job at the Daily Mail rather than agreeing to write an article she considered to be unethical. There was a spirited question and answer session too.

Welfare lunch; 12 February:
The Welfare team at its termly welfare lunch set aside time to learn about the new Oxford University Sexual Violence and Harassment Support Service for students. A presentation led by Pete Mandeville, Executive Officer of University Student Welfare, and Leah, the new Independent Sexual Violence Adviser, was very engaging and provoked many questions as we seek to increase our awareness of support available to those students who are survivors or alleged perpetrators. Brasenose wholeheartedly supports the University’s campaign “Oxford Against Sexual Violence”. More information can be accessed here.

Visiting monks and nuns:
We had a fascinating glimpse of the life of monks and nuns who used Brasenose as a base for a week from 11 to 14 February, as they participated in a University-wide project across the University Chapels called “Life Together Oxford”.  The monks came from the Community of Resurrection in Mirfield, West Yorkshire, and the Sisters from three orders in Oxford and Wantage: Sisters of the Love of God, All Saints Sisters of the Poor, and Community of St Mary the Virgin, Wantage. The highlight for us was a talk on “being human”, with the encouragement to accept both our gifts and our weaknesses as part of the journey to living integrated lives as whole people.

Miscellany:
On 11 February I attended part of Blurbs on Victorian etiquette by Ms Luisa Kapp. Unfortunately I could not stay for the presentation by Dr Kevin Fogg because of the Heads of House meeting that evening.

We wish the best of luck to our University Challenge team of Oliver Hanson (4th year), Tucker Drew and Allen Haugh (both 2nd years) and Maud Mullan (3rd year), with William Bunce (4th year) as reserve, who are travelling to the Manchester recording soon (taking a Brasenose nose with them for luck!)

Here is afascinating article by one of our Honorary Fellows, Prof Cappy Hill, the former President of Vassar College, about the value of a liberal arts education.

I am reading Cyberwar by Kathleen Hall Jamieson, which I recommend. Also new in the shops (well, a few of them) is the new edition of The Law of Strikes and Trade Union Recognition by yours truly and my colleagues David Reade QC, Michael Duggan QC and Katherine Apps. Just two of this blog’s readers could double the sales and put us up the Amazon bestseller list (from rock bottom) and make OUP very happy!