We had stunning weather for an amazing and very full day on the opening of the Library on 5 May. In the morning private ceremonies were held for each donor and their immediate families in front of their commemorative plaques.

After lunch Philip Pullman, CBE, FRSL, our guest of honour conducted a question and answer session with our students. At 3.15 pm by the special stage erected outside in Radcliffe Square, some 250 people were collected. We were joined by the Sheriff of Oxford, Councillor Mohammed Altaf-Khan, representatives of the University and several neighbouring Heads of House.

I spoke first and introduced Lord Patten of Barnes the Chancellor of the University who complimented the vital role of benefactors in our University. Philip Pullman had the crowd of students, Fellows and well-wishers spell bound and it was a special moment as he cut the ribbon. Philip’s speech centred on the role of libraries in his life starting with a cupboard in a corridor in Drayton Primary School, near Norwich, then a public library at the end of Battersea Park Road, then the Merionethshire County Library Service and the Oxford Libraries. Part of the speech is reproduced below and we hope to publish the whole in the Brazen Nose.

As the ribbon was cut by Philip, the Library was renamed The Greenland Library, together with the Del Favero Reading Room and the Smith Reading Room. The College is honoured to name them in recognition of the generosity of three generous supporters and close friends of the College, Duncan Greenland CBE, James Del Favero and Gerald Smith.

The history is the library is very revealing. The library and chapel ‘complex’ was unusually commissioned during the Commonwealth period. In defiance of Cromwell and the Commonwealth, our very own King’s Door was erected. The Smith Reading Room was formerly an open cloister that served as an exercise area and the College’s burial ground. With a need for further accommodation space, it was sealed during the nineteenth century. A writer to the 1825 Gentleman’s Magazine requested that it print two epitaphs 'which were lately in the cloister or burying ground of Brasenose College, Oxford, but which, on its being converted into two or three gloomy chambers for the living instead of the dead, have lately been removed'. In living memory, this space has had a number of functions, including our graduate Hulme Common Room.

As I said in my speech, ‘our library was first built in tumultuous times, consumed with the politics of rebellion. In our own turbulent era, it is the place of universities to insist on academic rigour, to challenge norms and perceived wisdom and to guarantee progress in making the world a healthier, more peaceful and better connected place. By providing a library for the future at Brasenose, Gerald, James and Duncan can inspire our students, today and decades from now – remembering the lessons of the past – to answer the pressing questions of their day’.

The conclusion of Philip Pullman’s speech was to this effect:

The internet won’t supplant books, any more than written language made spoken language redundant. In fact the biggest fortune so far made in a time of enormous fortunes began only a few years ago when Jeff Bezos started using the newly formed internet to sell … books. And if we want to imagine an emblematic picture of that process known as learning, we have only to think of someone sitting at a desk, pencil and paper to hand, with a book or books open in front of them. Silent, concentrated, calm, with a universe of knowledge spread out around them, and a catalogue to help them search it.

Oxford and its colleges don’t need any lessons about the importance of libraries. I wish this awareness could spread more widely. I wish that some schools whose Heads feel their libraries to be old-fashioned and unnecessary, and some local authorities eager to pass on government cuts by closing their public libraries before doing anything else, could share the same vision.

But although this is an imperfect world, there are some parts of it where learning and libraries and books are cherished, and where entropy can be held at bay. This is one of them. Brasenose Library is a magnificent collection, housed in buildings rich with history and situated in the most beautiful part of this beautiful city. It nourishes learning today and will do in the future as it has done for centuries and generations past.

And what enables places like this to live and grow and thrive is the generosity of donors such as those whose names will rightly live on in the Greenland Library, the Del Favero Reading Room and the Smith Reading Room. And it gives me great pleasure to thank them. 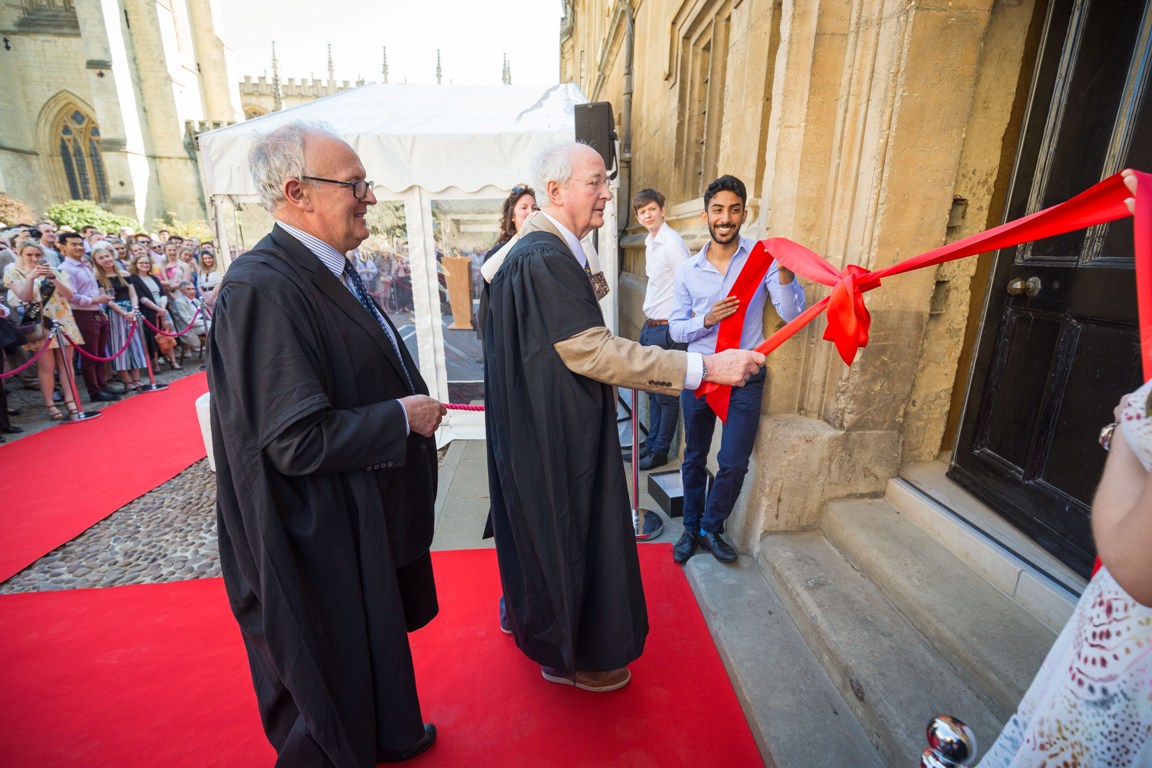 In the evening we held a dinner in honour of the donors to round off a magical day. The College and future generations of students owe a great debt of gratitude to all involved in the Library Project whether as donors, Fellows, builders, craftsmen, architects, Librarians, Development Team and whoever I have left out!

Congratulations:
We are thrilled that Prof Graham Richards (our Emeritus Fellow in Chemistry) has been elected as a Fellow of the Royal Society and we wish him many congratulations. Graham was one of the first scientific entrepreneurs and has been a terrific College man. It was wonderful to see him both at the Jubilee Lunch and the Library Opening.

We are delighted to hear that Sir Graham Fry, an alumnus, received the Order of the Grand Order of the Rising Sun. He was UK Ambassador to Japan and after retiring from the FCO, was advisor to some Japanese companies.  It is the highest order a non-royal or politician can receive.

Our neighbours to the west:
We held our latest Jubilee lunch on 4 May and at these events I like to read out extracts from the Brazen Nose which are relevant to the participants’ period. As an Honorary Fellow of Lincoln, I was especially interested to note in the Brazen Nose for 1950:

‘The beauty of Old Quadrangle, as seen from the Lodge, has been marred by the addition of a storey to the Lincoln building behind it. Whereas before one could enter the College without any visible reminder of our neighbours to the west, one’s eye is now met by a large expanse of wall rising up behind the gables of Nos. 2 and 3 staircases and breaking the unity of that side of the quadrangle.
Against this can be set the banishment from the Old Quadrangle of the bicycles which have in recent years increasingly disfigured it. Covered bicycle stands have been put up in the space between the Baths and Nos. 14 and 15 staircases.’

‘The JCR had a peaceful year; we have had few meetings, partly because we have not wanted them, and partly because the Boat Club stole the Minute Book.’ P 121

One Ale Verse from this period particularly caught my eye too:

“A bevy of Firsts
Affects not our thirsts
Nor erudite thought
Nose’s prowess in sport.”

Telethon drinks:
On 30 April, I was delighted to host a drinks reception for those students engaged on our Annual Fund telethon held in March this year. During this telethon many wonderful conversations were had between Brasenose past and present, and the 13 students involved truly enjoyed the opportunity to learn about Brasenose from those who came before them. This campaign again has been very successful, Brasenose’s most successful ever in fact, with over £210,000 raised in gifts and pledges – an astonishing figure. The most popular gift to the Annual Fund is a monthly direct debit of £20 and every penny truly counts, this year the fund topped £500,000 for the first time and continues to grow from strength to strength. Our alumni are the best alumni and thanks to their support, Brasenose will continue to enrich the lives of its students both present and future.

Miscellany:
On 3 May we held drinks for the Stanford students and the Visiting Fellow Prof Hank Greely. This is always a great occasion.

Finally not so fond greetings to the “person” who played bagpipes near the Lodgings at 5:15am on May Day!