What a two week period in the life of the College, tinged with great joy, lots of activity and some sadness.

27 February:
The latest in our Neuroscience and Society Lectures saw Prof Russell Foster, one of our Kurti Senior Fellows, talking about Sleep. This Lecture series is organised by our Senior Kurti Fellow Prof Chris Kennard, who is now Head of the Medical Sciences Division. The presentation was really fascinating and revealing. Amongst the interesting points covered by an animated Prof Foster were

a. it is more difficult to process information deep in the mid-afternoon;

b. the ability to drive at 4am is so impaired that it amounts to driving under the influence of drink;

d. our guts, liver and indeed every cell has its own clock;

e. even workers who are on night shift all the time do not become attuned to it because of the presence of light;

f. the Chernobyl disaster was due to sleep deprivation and lack of sleep raises increased risk of cancer.

I would strongly recommend Russell’s book in the small series Oxford University Press on Sleep.

28 February Ale Verses; Standing room only:
As usual we had an excellent set of entries for Ale Verses, which is the annual opportunity for students and Fellows to present a song on a subject of their choice. Thirteen were sung with great gusto (not always to tune!) by a packed hall. Although beer is served and students stand on the tables, this is by no means a riotous event. Our Director of Music, Christian Wilson was an excellent Master of Ceremonies together with our Dean, David Popplewell. There were an astonishing range of subjects covered in the songs including overwork, diversity in portraiture, gap years, the former Accommodation Manager, the lot of a graduate student, asbestos in buildings and much more.

There was a wide range of musical genres in play although there were two songs to the same tune. Several were by popular combos which have escaped even the attention of the (hip if not hip hop) Principal!

Karina Shooter, a Third Year Economics and Management student, was proclaimed victor by acclaim over some very strong competition. Her song was called “Where are the girls” to the tune of “Where is the Love” by Black Eyed Peas, a band with which I am very familiar. It was an impassioned plea for more female portraiture to be displayed in College.

I find it fascinating to delve into the extensive archives of Ale Verses, which provide a glimpse into what issues were relevant to the students of the day.  I note for example that the Ale Verses for 1964

To the tune of Tidings of Comfort and Joy!

The Oxfam drive to feed and save,

2 March:
The Annual Sports Dinner was ably chaired by Dani Ball who told a startled audience that although she is now an accomplished sportswoman she had played nothing before coming to Brasenose. The speaker was an alumnus John Haigh who matriculated in 1960. He retailed a fascinating series of tales of his times here as a sportsman. 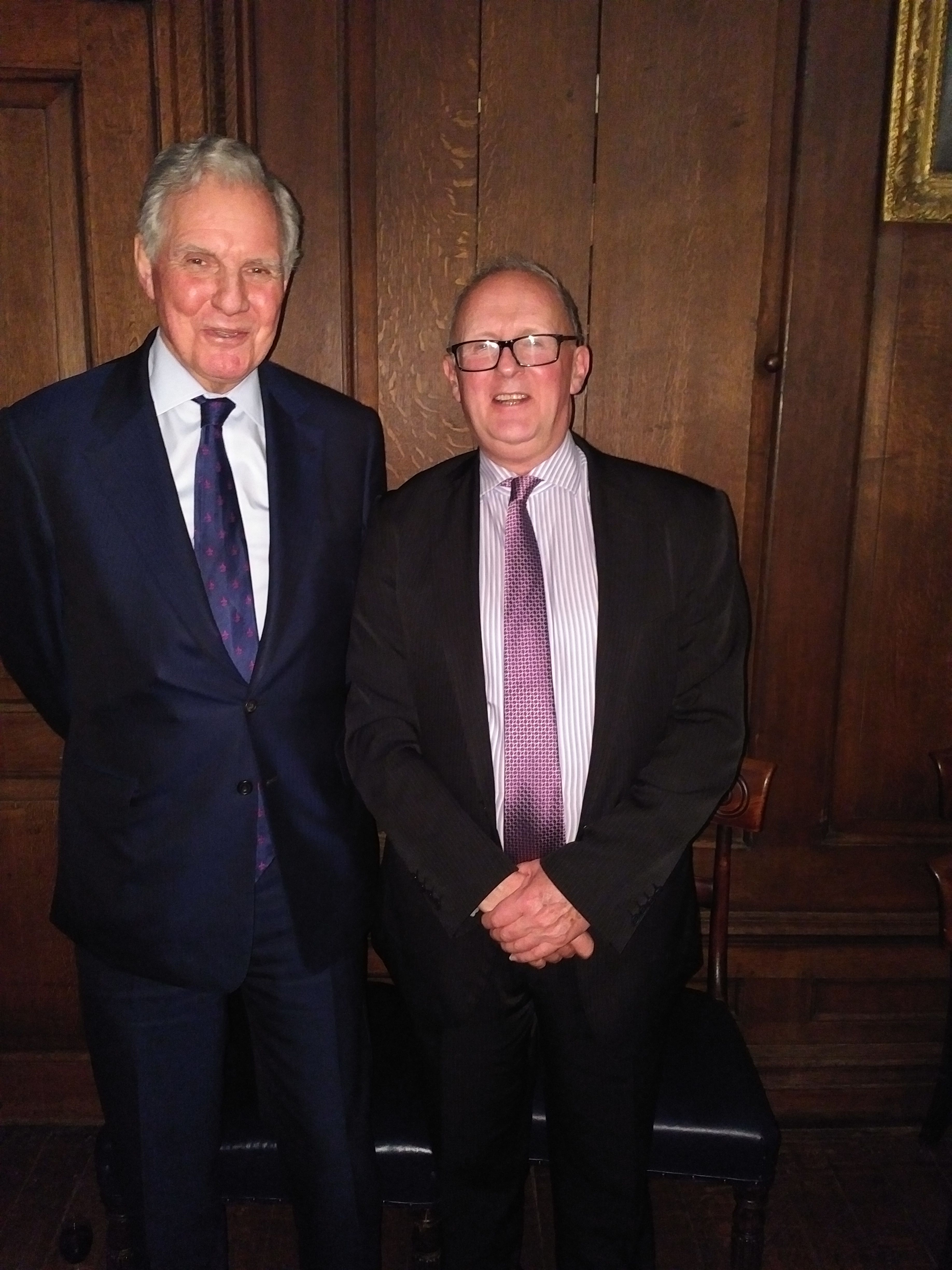 Jonathan Aitken (the former MP and Cabinet Minister - pictured) gave a sermon in chapel focussing on Psalm 130 which deals (appropriately in the light of his subsequent conviction for perjury) with repentance. He said that the last time he had preached on this topic was in the rather less salubrious surroundings of a prison. The prison chapel was packed on that occasion and he had an unprecedented visit to the place of wordship from “Big Face” who had been involved in gangland activities and for some reason thought Jonathan had himself written the Psalm. Jonathan spoke to us about living in an age of temptations. He has indeed had an extraordinary life.

6 March:
In this Principal’s Conversation, I turned the tables on Jeremy Paxman by asking him questions even though his new book is quite naturally called “A Life in Questions”. He is of course best known for his roles presenting Newsnight; Start the Week; and University Challenge. So central to the nation is he that his growing a beard caused consternation; indeed it launched a national debate on pongophobia (fear of beards!).

He has interviewed Henry Kissinger, Noam Chomsky, the Dalai Lama and David Bowie. Now he had agreed be interviewed by me; I am used to cross-examining difficult witnesses but I was quite nervous beforehand. The only area I ruled out for questioning was our College performance in the University Challenge competition two years ago! We filled the Oxford Martin School with some 150 students, Fellows and alumni.

I think he must have been somewhat nervous too (not that he showed it) because he wrote in our Visitors Book afterwards “I survived”. He answered questions about his tough interrogation technique; Brexit; the BBC; fake news; whether too much effort is spent on news; the politicians he admired (not many but he was fulsome in his praise of Cardinal Hume) and he spoke of Bill Clinton’s “animal magnetism”.

In his book he said of University Challenge “I love it because the stakes are so small; there’s not only no money but no razzmatazz no sequins; old fashioned family viewing”. He told a hilarious story about a contestant who left part way through the programme but a film editor was able to put back into the picture as a stationary figure.

One of the most fascinating insights was into his view of balance and impartiality; he said in the EU referendum for example the TV coverage was too much oppositional not thoughtful. 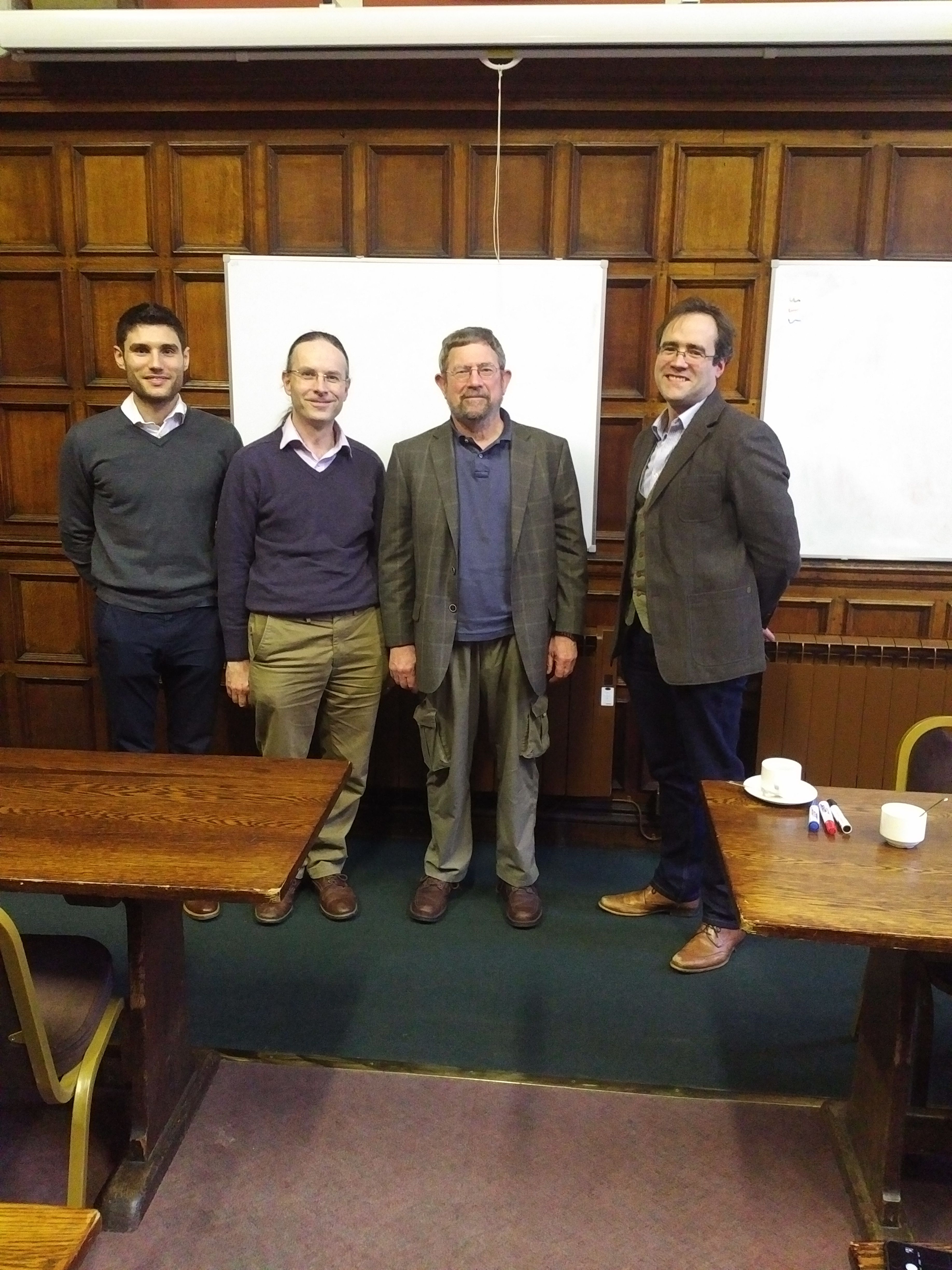 Just before our annual Betty Morley Dinner, a ceremony was held marking the recent election of on Mike Kosterliz our Nobel Prize Laureate and Mohamed Amersi of the Amersi Foundation to Honorary Fellowships (pictured). Scottish originally, Mike did a PhD at the College then moved to Brown University. In his acceptance speech, he said becoming Honorary Fellow was as big a deal as winning a Nobel Prize in that the Nobel Prize recognised contributions to scientific understanding, he saw the award of an Honorary Fellowship as honouring him as a person. We had the honour of entertaining him over the weekend together with his wife Berit. He also spoke to outrPhysics students. Mohamed Amersi was our other Honorary Fellow . A barrister and solicitor by training, he has been in business all over the world. He is the founder of the Inclusive Ventures Group a not for profit organisation.

He said at the ceremony in our Chapel “Today is a momentous day of my life: To be honoured as  an Honorary Fellow in the presence of such an august body is humbling, a pleasure and a privilege”. The Betty Morley Dinner commemorates two early benefactors, Elizabeth Morley and Joyce Frankland, to which Fellows invite eminent guests.

Half Term outreach:
This February Half Term week we were delighted to be involved in two outreach projects aimed to encourage and excite students from backgrounds that tend to be under-represented at the University of Oxford. On 13th February, we welcomed school students from the Slough and Windsor and Maidenhead Virtual Schools. (A ‘virtual’ school Head and Director of 6th Form track individuals to try and ensure that decisions taken by social workers do not impact negatively on educational progress). In the same week, we also hosted a Target Schools Year 12 shadowing day, organised in conjunction with the Oxford African and Caribbean Society and the Oxford University Students Union. Brasenose provided a hub for the Year 12s to be welcomed to Oxford, and for them to be paired with undergraduate students for a morning of shadowing. Further details are available on our website and these are just some of the multiple outreach activities, which we carry out under our Excellent Schools Officer, Joe Organ.

Judge John Taylor:
Another fascinating story on our website which I advise you all to read is about John Idowu Conrad Taylor a renowned Nigerian lawyer who became a judge and was a very well-known figure in Lagos.

The former head of state of Nigeria said of Taylor when he died at 56: “In an age which corruption, intrigues, back-biting and the love of office and power are fast becoming a virtue, Mr. Justice Taylor stood out from the crowd with a detachment that has brought immense dignity to the High Office of a Judge”.

In September 1936 he enrolled King’s College, London but in 1937 he transferred to Brasenose. Whilst at Oxford he boxed (lightweight division) for Oxford University Amateur Boxing Club including in two Varsity matches in 1938 and 1939.

Justus Carl Von Ruperti:
I wholly commend the new edition of the Brazen Nose which has come out recently but can I especially emphasise the fascinating article by the Editor (Llewelyn Morgan) on a plaque in our Antechapel over which I have been puzzled on many occasions. It proclaims that it is “placed…in memory of Justus Carl Von Ruperti Rhodes Scholar 1933-45 who died fighting for his country 19 Aug 1943”. That country for which he fought was Germany and the tale is fascinating.

I also note in the 1963 Brazen Nose a record that in that year two Gaudies took place which “between them included most of the veterans of two world wars” entertaining matriculands of 1919-1920 and those of 1945-1946. At the later Gaudy, the flowers on the tables were provided by Mrs I. von Ruperti, mother of von Ruperti.

PPE Society:
The Brasenose Society welcomed Ha-Joon Chang who gave a talk on Brexit, Trump and Le Pen. He is an influential development economist currently teaching in Oxford. He has written many accessible books about economics such as "23 Things They Don't Tell You about Capitalism" and "Economics: The User's Guide".

Oxford Belles:
One of our students Sophie Tang a second year, is part of an acapella group called the Oxford Belles. On 8th March they released a video for International Women's Day, covering Cyndi Lauper’s ‘Girls Just Want To
Have Fun (damental Rights)’. Through the video release, they raised money for Oxfordshire Rape Crisis, The Malala Fund, and Forward

Ackrill Lecture:
The College hosted the Ackrill Lecture on Ancient Philosophy given by Professor Richard Kraut on Thursday, 9 March on ‘Kalon, Sumpheron, Hêdu in the Nicomachean Ethics’. He is Charles and Emma Morrison Professor in the Humanities, in the Department of Philosophy, Northwestern University.

Professor John Lloyd Ackrill after whom the lecture is named joined Brasenose College in 1953 and became Professor of the History of Philosophy at Oxford in 1966.

He was the first holder of the chair in History of Philosophy. When a statutory chair is inaugurated, the holder has the option of staying at their own college rather than migrating to the college the chair is associated to. Ackrill exercised this right, preferring to stay at Brasenose rather than move to Keble where the Chair is based.

We also entertained to High Table the brother of Bernie Sanders, Larry who has lived in Oxford for more than forty years. He is a dead ringer for his brother and with similar views.

At the end of Hilary Term, we were saddened by the death of Sir Howard Hodgkin who was an Honorary Fellow of the College. He presented a series of twelve prints to the College, four of which grace our Lodgings.