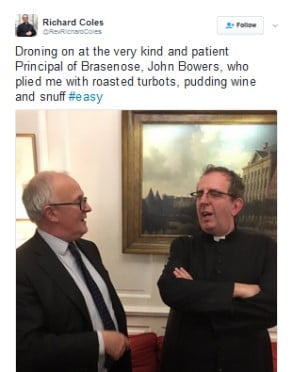 12 February:
Rev Richard Coles of Saturday Live fame on Radio 4 gave our Runcie Sermon in memory of Archbishop Runcie an alumnus of the college. He is also the Vicar of Finedon in Northamptonshire and used to sing with The Communards. I have not seen the c

Chapel so full in my time as Principal; Richard is an inveterate tweeter and commented that he was thinking of giving it up for Lent. He criticised the Pilling report on sexuality in the Church and thought that there was a risk of further marginalising the marginalised and using the language of Sir Humphrey rather than St Paul. He was a terrific guest and inevitably he tweeted afterwards about his visit.

15 February:
We held our Graduate Dinner which is an opportunity for all graduates to attend together with their supervisors. So many graduates signed up that we had to have a separate party in the Medieval Kitchen and bring those guests in for the speeches. Prof Polly Arnold the Crum Brown Professor of Chemistry at the University of Edinburgh and an alumna of Brasenose addressed us. She studied here under Graeme Richards. She won the Rosalind Franklin Royal Society prize in 2012.

Polly is also the author and producer of Chemical Imbalance a video and accompanying book about the lack of female scientists: https://vimeo.com/71294882. The best lines in her excellent and wide ranging speech were that “Women have to feel 120% ready to go for a job; men only 80%” and “Women are getting the prizes, men are getting the jobs”.

Polly had to go back on the sleeper from Euston to Edinburgh as she was due to lecture the next morning at 11am so we are thus extra grateful for her coming.

16 February:
We received confirmation that the College’s revised Statutes had been approved by the Queen In Council. This is the culmination of diligent work over a number of years by a number of Fellows, and in particular our Engineering Tutor Prof Ron Daniel when he was Vice Principal.

17 February:
The pace of events here is relentless. A good example was this Friday when we had a lunch for potential funders, then five minutes off before we played host all

afternoon to the launch seminar for Contract of Employment, an OUP book edited by Mark Freedland who is Fellow in Law at St Johns College but who started his career as a JRF at Brasenose. This event brought together academics and practitioners in employment law with sessions chaired by Sir Nicolas Underhill, a Lord Justice of Appeal and Mark Freedland (the photo shows me speaking at it). There were drinks for this event in the Lodgings afterwards.

Philippa Collins one of our PhD students organised the event. She is the latest of a wonderful employment law tradition in this College, with towering intellects such as Otto Kahn Freund, Hugh Collins and Anne Davies as well as well-known practitioners and Judges such as Jeremy McMullen and Jeffrey Burke and of course Mark Freedland.

There was then an immediate segue after the book launch to the University Law Club dinner which was held in our Medieval Kitchen, where members of the Law Faculty dine with judges. One of the strengths of Oxford is the close connection between academia and the practitioner world.

19 February:
One of the really frustrating things about my job is missing some events because of date clashes. I would like to stretch to be in two places at the same time. I was sorry to miss the Corporate Choral Collegiate Service but our Chaplain Revd. Professor Judith M. Brown told me “I think BNC music is greatly to be congratulated after the Intercollegiate Service yesterday in St. Mary the Virgin.  Sarah Hughes [one of our Organ Scholar] did a marvellous closing voluntary. We should feel very proud of the college's contribution.”

20 February:
We had our annual dinner for Executive MBA students attached to Brasenose. It is always a lively occasion. Most of the students have had previous experience running international companies. We had the pleasure to welcome back Gordon Orr (formerly of McKinseys) who spoke with enormous knowledge and indeed passion on China. Anyone who wants to know about the world needs to study current developments there.

22 February:
The William Smyth concert is a great opportunity for staff to demonstrate their musical skills. This year saw an exceptional range of music performed by Andrew Talbot our Head Porter, Kate Roberts my PA (with her husband), Christian Wilson, Chris Timpson, Matthias Winkel, Konstantin Ardakov, Jonathan Katz and Elspeth Garman. The latter performed Northumberland Traditional songs which approximated to English but only just.

Just before this I had heard David Miliband speak on Refugees at a packed Sheldonian Theatre. The scale of the issue can be seen by the fact that this year a person has been displaced by war on average every 24 seconds. He reminded us that Steve Jobs was the son of a Syrian refugee.