Super massive black holes (SMBH) lie at the centre of galaxies, including our own: the Milky Way. How does the activity of SMBH influence star formation in the host galaxy? The James Webb Telescope could be about to tell us.

Polycyclic Aromatic Hydrocarbon molecules (PAHs) are organic compounds made up of at least two benzene rings. On Earth, PAHs occur naturally after incomplete combustions of carbon-based substances, for example, charcoal barbecued beef burgers. In space, they are ubiquitously present in large abundances (Fig 1). PAHs are detected through their infrared signatures (part of the light spectrum invisible to the human eye) and are often found near massive stars. Hence, their infrared emission is used to determine the star formation rate in galaxies, one of the key indicators for understanding galaxy evolution.

It is now well established that the growth of SMBH (through accretion of gas) plays an instrumental role in the evolution of galaxies and that the star forming activity in the host galaxy follows a similar evolutionary path. Both activities reach their peak at the same time, when the Universe was roughly less than half its current age. Theoretical models suggest that feedback from growing SMBH, in the form of powerful outflows (of ionised or molecular gas expelled from the galaxy as shown in Figure 2), can have a significant impact on the host galaxy and it may be responsible for shutting off the star-forming activity and maintaining the galaxy’s quiescence after star-formation has been quenched.

The launch of the James Webb Space Telescope on December 25th 2021 will revolutionize studies of PAH molecular spectroscopy in galaxies by providing an unprecedented level of spectral and spatial detail. With a gold mirror of 6.5 m diameter (gold is highly reflective at infrared wavelengths), JWST will be able to take images with enhanced resolution while the sensitivity of its instruments will enable measurements of light from faint/distant objects as well as low brightness regions. By measuring PAH emission from nuclear and circumnuclear regions in galaxies Professor Rigopoulou and her team will be able to elucidate the impact of the central SMBH on its host galaxy and advance our understanding of thesurvival of PAH molecules in the harshest environments in the Universe. First JWST data will arrive in late Spring, we can’t wait to get our hands on them! 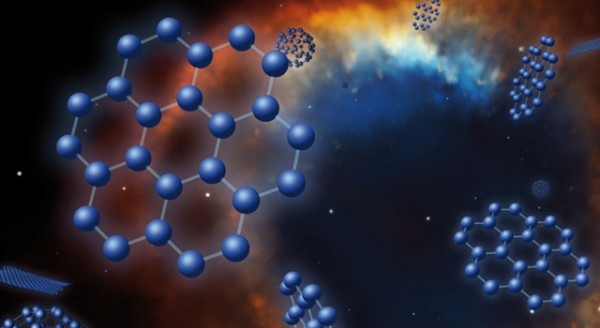 Figure 1: Artist's impression showing the surroundings of an SMBH at the heart of NGC 3783, an AGN in the Southern constellation of Centaurus. A wind of material in the polar region of the nucleus is visible. PAH emission is thought to originate in the inner parts of the galaxy disk which hosts the SMBH (credit: ESO/M. Kornmesser)
Figure 2: An artist's concept of C60 and C70 PAH molecules superimposed on an image of the Helix Planetary nebula (credit: IAC/NASA/NOAO/ESA/STScI/NRAO)