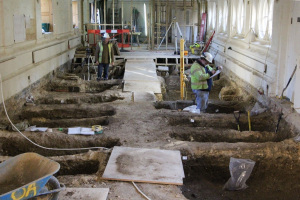 Currently, one of our historic rooms, the Old Cloisters, is undergoing renovation, making it in to an extension of the main library space above, doubling the study area and creating a stunning, modern multi-functional room fit for the next 500 years.

Here's what one of our undergraduate students has discovered about the archaeological work that has taken place in this historical space as part of the renovation project.

"Before the redevelopment work on Brasenose’s old cloisters fully began the college had the fantastic opportunity to learn more about its history with the help of Oxford Archaeology South.

Excavations were carried out to see whether it is possible to trace the building developments and changes of spatial function in the archaeological record in the cloisters. The college was founded in 1508-12, on the site of Brasenose Hall, an existing group of halls with medieval origins. The building programme started in 1509 on the main quad and consisted of a hall, chapel, library and chambers in the form of a square of buildings. Throughout the proceeding centuries further developments and construction took place, leaving us with the arrangement we can see today.

It was known before the excavations began that there were a number of bodies interred beneath the floor of the old cloisters. This number was revealed to be over 40! The college has decided to leave them undisturbed and lay the new floor level above the grave slots. Despite the grave slots being neatly cut some were discovered to have collapsed, likely disturbed in an earlier century by later building works. This led to the archaeologists finding miscellaneous pieces of skeleton throughout the site, such as a knee cap and shoulder bone. In one or two cases the grave diggers are seen to have made mistakes, with half started slots at the edge of the precinct that had to be abandoned because they were too small. We can learn from some extant burial records preserved in the college archives that these bodies date from c. 1669 to 1754.

As well as the graves, islands of archaeological strata have been left intact. For example the foundation section of a wall running from east to west across the cloisters has been discovered, the stones robbed out at a much earlier point. Applying the concept of stratigraphy and using pottery as a dating tool, this wall can be identified as belonging to an original part of the hall. There are also deposits of mortar floors that appear to represent a building dating to between the construction of the main quad at Brasenose in the 16th century and the second quad, on which construction work began in 1656. This is significant as such a building is not overtly present in documentation or historic maps in the archives.

Although the finds have not been numerous there have been some useful pieces of pottery unearthed, that can provide a rough date of 1550-1650 in their deposited layer. We have one such diagnostic fragment that may have been part of a coarse-ware cooking pot. It was made on the wheel and still has traces of carbon where it was placed in a fire. Another interesting find was initially believed to be a coin. However it has now been identified as a ‘jeton’, a counter-like object that could be used for calculations on a board similar to an abacus or as a game piece. They were produced throughout Europe between the 13th and 17th centuries. The one found in the cloisters dates roughly to 1600, at a time when Nuremberg monopolised their manufacture. On one side it reads “Hanns Krauwinckel in Nur(nberg)”, Hans Krauwinckel being the jeton’s maker. The reverse often held a moralising message either in German or Latin, ours proclaims “Gott allein die Ehre sei”, “Glory be to God alone.""